The shale gas drilling boom in Pennsylvania is filled with controversy. In order to apply some degree of science to the problem we as community scientists working on the health of our waterways became involved with Dickinson College's Alliance for Aquatic Resource Monitoring ( ALLARM).

Since shale gas drilling and hydraulic fracturing have the potential of allowing flow back water to reach streams and water supplies we needed a new approach for early detection. We partnered with the Alliance for Aquatic Resource Monitoring ( ALLARM) to accomplish our new goal of detecting flowback water from shale gas drilling and hydraulic fracking.

ALLARM is a project of the Environmental Studies Department of Dickinson College. Since its founding in 1986, ALLARM has become a nationally recognized technical and programmatic support center for community organizations interested in watershed assessment, protection and restoration.

ALLARM’s program goals are to:

The fracking fluid that returns to the surface during and after drilling is known to contain large amounts of chlorides, sodium, sulfates, metals (such as barium, iron, manganese, arsenic, strontium, lead, cadmium, chromium and aluminum), naturally occurring radioactive materials (such as uranium, radium, and radon), methane and bacteria. Most of these substances can be simply detected by testing waters conductivity and total dissolved solids (TDS).

After baseline values have been established an increase of three times normal conductivity could be an indicator of flowback contamination. In such instances DEP is notified and a water sample is sent to a certified laboratory to be tested for barium and strontium. A positive test for barium and strontium is proof that flowback contamination is occurring.

Visual monitoring also provides information about other conditions that might be impacting stream health. Some examples are erosion and sedimentation, fuel leaks, chemical leaks and physical damage to roads. When visual monitoring detects a problem photographs are taken and a description of the problem is written. The information is then reported to the Conservation District and other appropriate authority.

Stream Monitoring Map and Data
The map shows the locations of wells and monitoring sites.
Clicking on the star icon will give you a link to the most up to date data.

Other protocol data is available on the Data Files page

These are from Trout Unlimited

How to collect water quality data in the field

Finding Gas Wells Near You 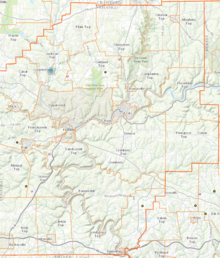